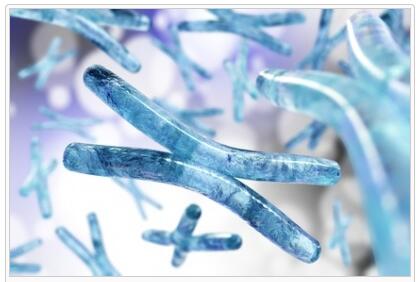 Adrenoleukodystrophy (ALD) is also known as Addison-Schilder syndrome in medicine. It shows up in childhood and is counted among the hereditary diseases.

Adrenoleukodystrophy ( ALD ) is also known as Addison-Schilder syndrome in medicine . It shows up in childhood and is counted among the hereditary diseases . It is characterized by a rapidly progressing neurological decline, in the end phase of which there is dementia and a loss of vital body functions.

The disease, which is often fatal, almost always only occurs in males. By contrast, women mostly only transmit the x-linked recessive disease. Only in rare cases is there a defect in both female X chromosomes that leads to the onset of adrenoleukodystrophy. In males, the incidence of ALD is 1: 20,000 to 1: 50,000.

Due to a genetic defect, certain fatty acids cannot be broken down in the organism. This affects both the brain and the spinal cord. This also causes damage to the adrenal glands.

Genetic studies showed that mutations within an ABC transporter gene occurred in all patients . This gene is located on the X chromosome, gene locus q28. Its job is to encode a protein that is located in the membrane of the peroxisomes.

Its direct involvement in the transmission of extra-long-chain fatty acids in the direction of peroxisomes is, however, controversial among medical professionals. Normally, the breakdown of fats takes place inside the peroxisome. In adrenoleukodystrophy, however, the fatty acids accumulate in the white matter of the brain and in the adrenal cortex.

The extra-long-chain fatty acids are also stored in the cell membranes. Some researchers therefore believe that the membrane structure of the myelin changes in ALD patients, which explains demyelination. In this way, the impulses are prevented from being passed on, which is ultimately noticeable in the motor and mental deterioration of those affected.

Whether symptoms arise from adrenoleukodystrophy depends on the sex of the patient. The changed gene is always on the X chromosome, which is only present once in men. For this reason, the condition shows itself almost exclusively in male patients.

Since women have two X chromosomes, but the faulty gene is usually only on one of them, they often do not even notice that they have a hereditary disease. In their male descendants, however, there is a 50 percent risk of developing adrenoleukodystrophy. Symptoms almost always only occur in male patients.

In contrast, impairments in women appear only rarely and in later years of life. In male patients, the adrenal glands are no longer producing enough hormones. Therefore, they suffer from hypotension , weight loss , weakness and vomiting .

There is also a brown discoloration of the skin. Other than adrenal weakness, some patients experience no other symptoms for years. Doctors differentiate between two forms of adrenoleukodystrophy. These are adrenomyeloneuropathy (AMN) and ALD with brain involvement. AMN is considered a milder form of ALD and is found in almost all adult men who have an ALD genetic make-up.

Typical signs include coordination problems , muscle weakness that leads to gait disorders , and pain in the legs . Later, loss of urine and stool, erectile dysfunction and paralysis are possible. Many patients need a wheelchair as the disease progresses.

ALD with brain involvement occurs in every third boy with the disease between the ages of three and twelve years. This shows a severe inflammation of the brain, which continues. The affected children, who previously developed normally, suddenly show changes in behavior such as restlessness and poor concentration . Finally, swallowing disorders , paralysis , deafness and blindness set in . It is not uncommon for the disease to end with death.

A diagnosis of adrenoleukodystrophy is considered difficult because the symptoms can also be caused by other diseases. It can sometimes take several years before the correct diagnosis is made. The safest method is a blood test to determine the changed genetic makeup.

In addition, imaging procedures such as magnetic resonance imaging (MRI) of the skull can be performed, with the help of which the doctor can identify demyelinated and atrophic areas of the brain. The prognosis of adrenoleukodystrophy depends on the respective course of the disease. Life expectancy with AMN is considered normal, while with brain involvement after two to four years there is severe disability and the need for care.

As a genetic metabolic disease that does not break down essential fatty acids in the body, adrenoleukodystrophy leads to severe neurological damage. Sometimes the disease breaks out as early as infancy. The mental and sensorimotor development shows considerable deficits. The life expectancy of affected children is between 10 and 14 years.

Adrenoleukodystrophy settles on the X chromosome. Men are therefore more at risk than women. When the discomfort occurs in adults, it cannot be foreseen. Women, on the other hand, do not belong to the risk group until later in life. Anyone who has a tendency to adrenoleukodystrophy due to familial predispositions in their genome should seek medical help immediately if there are signs such as: disease of the adrenal glands, states of exhaustion, weight loss, nausea, brownish discoloration of the skin.

Otherwise, there will inevitably be drastic complications that have a negative impact on quality of life and life expectancy. The terminal stage can be accompanied by bed rest, total degeneration of the nervous system and failure of the organs. Sometimes this leads to death. Once diagnosed with adrenoleukodystrophy, symptoms can be relieved, but not cured.

Therapy and medication are tailored to the person affected, as the disease has different specifications. The medication alleviates spastic muscle cramps and can make the neurological side effects and inflammatory processes in the brain more bearable. From a nutritional point of view, Lorenzo’s oil is administered to lower the increased fatty acid concentration. A bone marrow transplant may be performed depending on the patient’s condition.

When should you go to the doctor?

As a rule, adrenoleukodystrophy does not have any particular complaints or symptoms that could directly indicate the disease. For this reason, an examination by a doctor is necessary in any case in order to avoid possible consequential damage that could occur if the disease is detected too late. If the person concerned suffers from weight loss and low blood pressure, a doctor must be consulted.

It is not uncommon for a loss of consciousness to occur. As a rule, the general practitioner can be visited first, who will refer the patient to a specialist in the event of a diagnosis. An urgent visit to the doctor is advisable if coordination disorders or gait disorders persist. Hearing problems can also indicate adrenoleukodystrophy.

If the adrenoleukodystrophy has progressed further, paralysis or urine loss also occur. If these symptoms occur, urgent treatment of the patient is necessary. In addition to deafness, it is not uncommon for sudden visual problems or, in the worst case, complete blindness to occur.

A cure for adrenoleukodystrophy is not possible. Therapy is therefore limited to relieving the symptoms. The failure of the adrenal glands can be easily treated by administering the missing hormones . The patient is also given medication for spastic muscle cramps.

Some patients also receive something called Lorenzo’s oil. It is a mixture of glycerine trierucate and glycerine trioleate. The ratio is 4: 1. The administration is intended to lower the concentration of the long-chain fatty acids to a more favorable level.

Physiotherapeutic exercises or occupational therapy , which are used to loosen up the muscles, can also be carried out to provide support. In the case of swallowing disorders, artificial nutrition is feasible. Psychotherapeutic support can also be useful.

Adrenoleukodystrophy generally makes the person affected feel sick and weak, and the patient’s resilience as a result of the disease decreases considerably. The result is low blood pressure and thus paleness of the face. Furthermore, the low blood pressure can also lead to a loss of consciousness . The affected person often loses weight and also suffers from diarrhea and vomiting.

The skin can turn brown. There is also pain in the muscles and legs. The coordination decreases and gait disorders often occur, such as limping or hobbling. The symptoms of adrenoleukodystrophy significantly limit and reduce the quality of life.

Often the patients are dependent on the help of other people or on the use of a wheelchair in the course of the illness . Concentration also decreases and there is an inner restlessness. Without treatment, the patient dies. The treatment itself can be carried out by administering the missing hormones, without any particular complications.

If a family is known to have adrenoleukodystrophy, it is recommended that all male relatives be examined. This allows early treatment if needed.

As a rule, the options for follow-up care for adrenoleukodystrophy are relatively limited. With this disorder, the person concerned is dependent on permanent treatment in order to alleviate the symptoms and avoid further complications. Early diagnosis and treatment have a very positive effect on the further course of the disease.

Most patients also need physiotherapy to relieve the discomfort in the muscles. Many of the exercises from this therapy can also be performed in your own home in order to increase the mobility of the person concerned. The life expectancy of the patient is not negatively affected by this disease.

Since adrenoleukodystrophy can in some cases also lead to psychological complaints or depression, discussions with friends or with your own family are very useful.

You can do that yourself

Adrenoleukodystrophy (ALD) is a hereditary metabolic disease that men suffer more than women.

There are no self-help measures that are suitable for treating the cause of the disease. Those affected can, however, help to control the risks and to alleviate the severity of the course of the disease. Although many symptoms of the disease can be treated well, those affected often do not receive adequate treatment until much too late because the disease, which is very rare, has not been properly diagnosed.

If ALD has already occurred in a family, patients should inform a doctor of this fact and insist that a specialist be called in to clarify the suspicion of ALD.

Women who are carriers of the defective gene must be aware that while they themselves either will not get the disease at all or will only develop mild symptoms, the likelihood that their male offspring will suffer from a severe form of ALD is very high. This should be taken into account when planning a family. There are counseling centers for carriers of hereditary diseases that support them with questions about family planning.

People who are already ill should eat a low-fat diet in order to keep the concentration of harmful fatty acids in the blood low. If the muscles or motor skills are impaired , physiotherapy should be started as early as possible in order to counteract degenerative development.