Are you confused by the many acronyms you see in your business emails? Use this practical guide and find out which 10 are the most used in B2B communication.

Emails are an essential part of any business. This allows you to make direct contact with new customers, existing business partners and potential suppliers. You probably know better than anyone that a business inbox is quite busy. Companies exchange a lot of emails every day and are therefore always looking for more effective ways of communication.

Acronyms are useful tools that save you time in the world of business-to-business communication (B2B). With these abbreviations, you use the first letter of each word to form a shorter term. This linguistic tool helps to limit the number of words, stay concise and write faster.

However, acronyms can be confusing — especially if you’re new to B2B email. To help you save time and stress when trying to figure out the meaning of a specific letter mash, we’ve put together this guide. Here we explain what the most commonly used acronyms are. 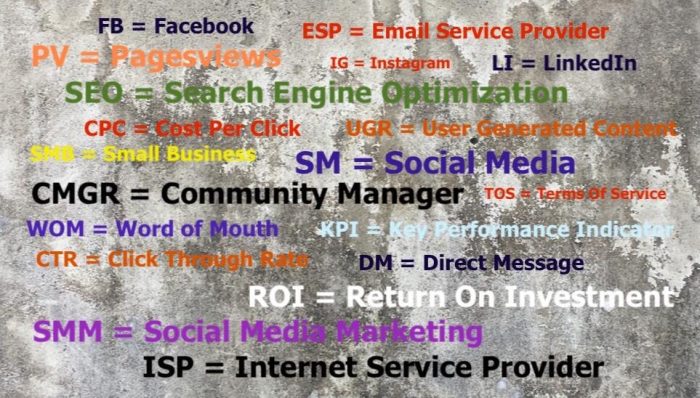 KNOWLEDGE OF ACRONYMS IN EMAILS

How does WFH differ from NRN? Use the helpful list below to discover 10 commonly used acronyms in business communications.

You will regularly encounter the abbreviation ASAP in emails with an urgent or stimulating tone. It means: ‘as soon as possible’ (as soon as possible). You can use this acronym to indicate that something needs to be done right away. Suppliers often use this to emphasize the speed with which they can deliver something. However, you will also see it in all kinds of other types of communication. Choose this acronym if you outsource work that needs to be done ASAP.

IMO occurs in both B2B and informal communication. It means: ‘in my opinion’ (in my opinion). This acronym allows you to tone down sentences and emphasize that you are conveying something that is not immediately a fact. It also allows you to avoid an authoritarian tone; you show that your feedback is based on your personal opinion.

LMK stands for: ‘let me know’. This acronym can be used as a friendly, informal end to an email or other form of communication. You indicate that you want an answer to a non-urgent question.

NRN means: ‘no reply necessary’. This lets the reader know what the intention of the communication is, without the person having to respond immediately. With NRN you prevent your inbox from overflowing with messages saying that a message has been read. You can use NRN to close a list of instructions or to inform partners or colleagues about something new.

FYI is not limited to business communications. You will also often encounter it in informal texts and short messages. It is the abbreviated version of ‘for your information’. With FYI, the sender indicates that it is sharing background information or a message that may be useful to your company or current project.

EOD means ‘end of day’. This allows you to indicate what time your company closes its doors. EOD is also often used to set a deadline for an assignment, invoice or other document: “Can you finish the EOD report?”.

Have you ever sent an email to which you received an automatic reply? There is a good chance that it contained the acronym OOO — ‘out of office’. Use this handy acronym if you’re on vacation or on a business trip where you don’t have access to your laptop or account. This informs colleagues that you will respond ASAP.

PS is both professional and old-fashioned, but still looks great at the end of an email. With PS, or ‘ postscript ‘ (English: postscript), the sender indicates that they want to add an extra comment or thought at the end of a message. That comment is often not directly related to the core message. Use PS to include additional information — possibly with a different subject — in an email. You do not have to send a separate message.

If we are talking about another subject, then OT is very appropriate. While you can use PS at the end of a message, OT is usable in the text itself. This allows you to quickly mention important, but not immediately relevant information.

With WFH you indicate with an abbreviation where you work: ‘working from home’. This acronym can be used by a manager to ask employees to work from home. It also allows someone to let you know where they are currently working.

THE WORLD OF B2B EMAIL ACRONYMS: THERE’S MUCH MORE

The acronyms mentioned above are popular abbreviations in B2B email communication. However, there are many more such words. Use them to save time and demonstrate your understanding of contemporary business jargon. See AbbreviationFinder for more acronyms and abbreviations.